“Re-Constructivist Architecture,” an exhibition now on show at the Ierimonti Gallery in New York, features the work of thirteen emerging architecture firms alongside the work of Coop Himmelb(l)au, Peter Eisenman and Bernard Tschumi. The title of the exhibition is a play on words, referring to the De-Constructivist exhibition of 1988 at the Museum of Modern Art that destabilized a certain kind of relationship with design theory.

This reconstruction is primarily of language. The architects draw from archives—mental, digital or printed on paper—distant from the typical parametric and highly schematic rationales that characterized the last thirty years of design in architecture. Within the theoretical system that drives architectural composition, these archives inevitably become homages, references, and quotes. 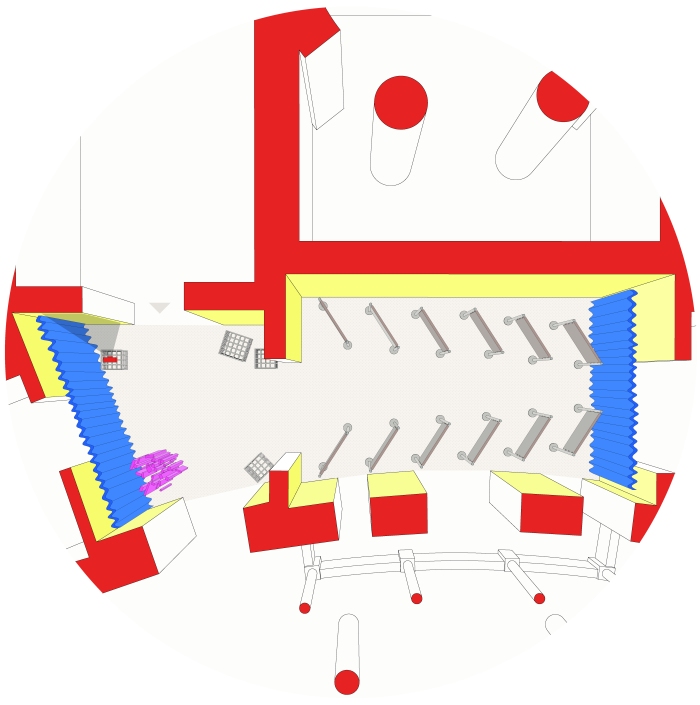 Even if it is diverse, this referential landscape maintains very distinctive traits. Renovated links to a series of iconic and communicative architectures, often narrated with a concise and simple lexicon, emerge from this landscape. The architectures are created with radical and sometimes ironic premises that set a distance from narcissistic blobs. In contrast, a strong passion for theoretical investigation becomes fundamental again.

The group of architects from the thirteen firms, all born in the eighties, share not only common suggestive visions but also the challenges of growing in a scenario where the role of the architect is constantly evolving and redefining itself. Some of them are strongly connected with their cities, whereas others have a broader network. Some of them are highly active on social media and the web, whereas others are making a new use of printed media.

It is not a coincidence that the exhibition is a spinoff of a series of lectures called “Generazione: a call from Rome.” From September 2016 to June 2017 the group of architects presented (and will present) their work at the Casa dell’Architettura, in Rome. Each of the offices, along with sharing their professional experience, were asked to elaborate a project for a House in the Roman Countryside; a design exercise meant as a typological investigation, or, more generally, as a meditation on the autonomy of the discipline of architecture.

This type of exercise originated in the eighties as a theoretical speculation in which the architectural project could be considered independent, as a revolutionary act itself without the need for association with political doctrines.

This group of architects could be seen as paradigmatic, but is not exhaustive. In this developmental stage, the Movement is still defining its boundaries. However, we could start to identify its main features. We could recognize the work of recent trailblazers or even the fathers that inhabit the Pantheon of this Movement, but this is not our goal. The distinctive aspect that distinguishes the works presented here from some parallel currents is an interest in a typological point of view, freed from ideology: the objective of the research is architectural language itself—a counter-trend that tries to recover a debate lost years ago.